What do these four places have in common?

What do these four places have in common?

How could that be?  How could the First Settler’s Lists, our main source for identifying the German Origin locations of our Volga German ancestors, report non-existent places?

There are several possible explanations.  It could be a translation error - the original handwritten documents can be very challenging to decipher and translate, and the style of handwriting in use in 1767 is different from modern Russian handwriting.  It could have been a misunderstanding when the original document was prepared - the scribes were writing German locations in Russian Cyrillic handwriting.

So, how do we figure out where these families really came from?

To solve this mystery, I first turned to Karl Stumpp’s The Emigration From Germany To Russia In The Years 1763 To 1862.  The surnames of the settlers in Kolb were Arndt and Rehn.  The Stumpp book states that both of those families came from “Bergheim/Büdingen”.  Searching for “Bergheim” in the online Meyers Orts- und Verkehrs-lexikon des deutschen Reichs (a/k/a Meyer's Gazetteer), I find a place with that name close to Büdingen.

The surnames of the settlers in Walter were Braun and Döll. I consulted the German Origins pages on the AHSGR web site, which identifies Heckenbergheim as the origin location for those two families.  However, according to the online Meyers Gazetteer, Heckenbergheim does not exist.  To be more precise, Heckenbergheim did not exist during the time frame covered by the Meyer's Gazetteer (1871-1918).

But "Heckenbergheim” did exist when our Volga German ancestors emigrated from what is today the German state of Hessen.  A 1728 map of the County of Hanau from the David Rumsey Map Collection shows a place called “Heckenbergen” northwest of Büdingen (see image above - a portion of the 1728 map).  The church records on Archion include parish records for a locality called “Usenborn Bergheim”.  All four families – Arndt, Rehn, Braun and Döll – can be found in those church records.

What is the answer to the question posed at the top of this post? All four village names are the same place - a place that was once known as Heckenbergheim, but today is known as Bergheim. 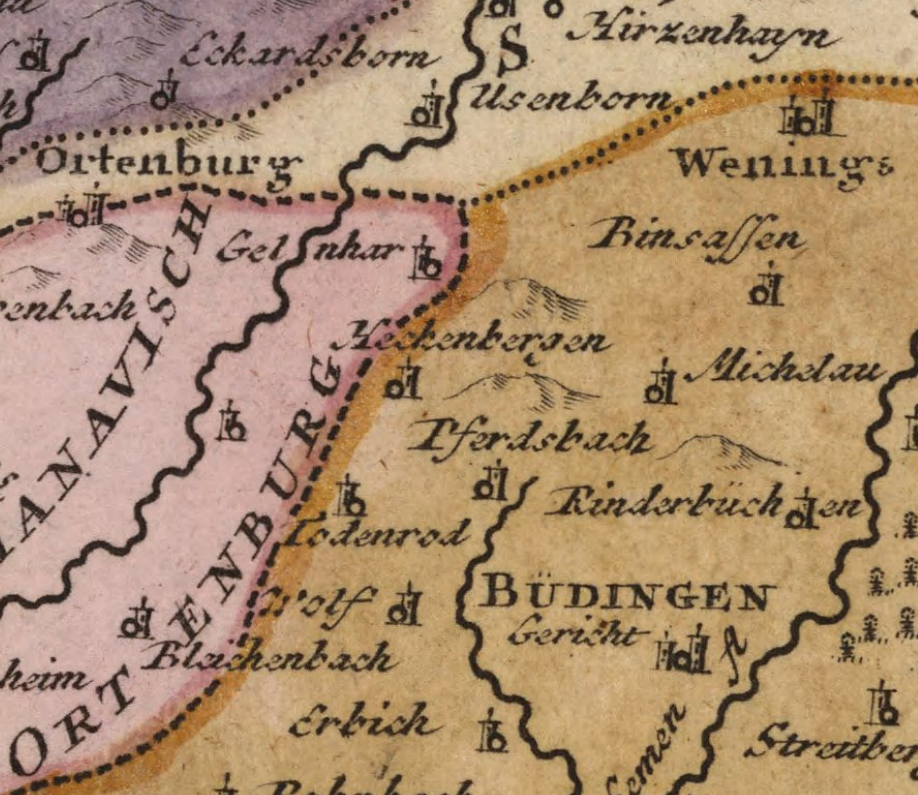