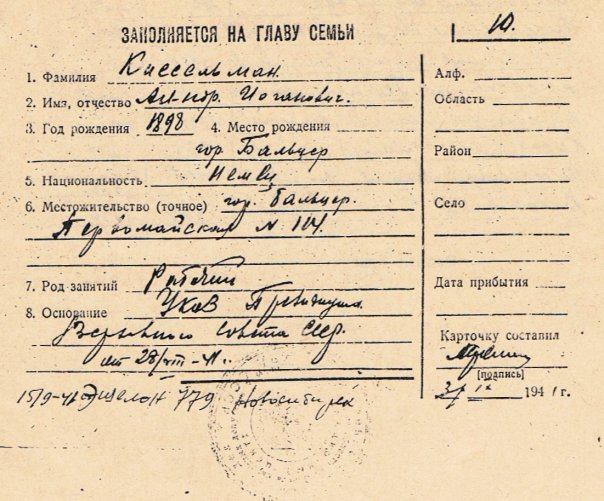 Notice of eviction of the Alexander (son of Johann) Kisselman (b. 1898) family from Balzer, pursuant to the deportation edict dated 28 August 1941 and executed on 31 August 1941. A note is added about the family's arrival on 15 September 1941 in Novosibirsk on train no. 779. [Document posted by Andreas Root to the Facebook photo collections of the Russian German's International.] 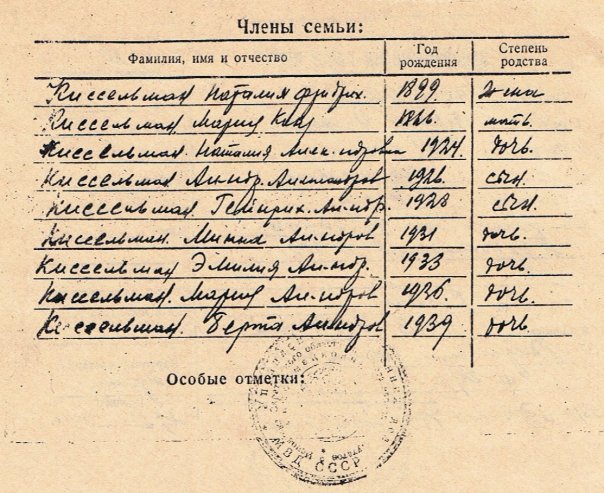 Joseph Stalin's forcible resettlement of over 1.5 million people, mostly Muslims, during and after World War II is now viewed by many human rights experts in Russia as one of his most drastic genocidal acts. Volga Germans and seven nationalities of Crimea and the northern Caucasus were deported: the Crimean Tatars, Kalmyks, Chechens, Ingush, Balkars, Karachai, and Meskhetians. Other minorities evicted from the Black Sea coastal region included Bulgarians, Greeks, and Armenians.

Resistance to Soviet rule, separatism, and widespread collaboration with the German occupation forces were among the official reasons for the deportation of these non-Russian peoples. The possibility of a German attack was used to justify the resettlement of the ethnically mixed population of Mtskheta, in southwestern Georgia. The Balkars were punished for allegedly having sent a white horse as a gift to Adolf Hitler.

The deportees were rounded up and transported, usually in railroad cattle cars, to Uzbekistan, Kazakhstan, Kirgizia, and Siberia -- areas called "human dumping grounds" by historian Robert Conquest. Most estimates indicate that close to two-fifths of the affected populations perished. The plight of the Crimean Tatars was exceptionally harsh; nearly half died of hunger in the first eighteen months after being banished from their homeland.

In February 1956, Nikita Khrushchev condemned the deportations as a violation of Leninist principles. In his "secret speech" to the Twentieth Party Congress, he stated that the Ukrainians avoided such a fate "only because there were too many of them and there was no place to which to deport them." That year, the Soviet government issued decrees on the restoration of the Chechen-Ingush Autonomous Republic and the Kabardino-Balkar Autonomous Republic, the formation of the Kalmyk Autonomous Oblast', and the reorganization of the Cherkess Autonomous Oblast' into the Karachai-Cherkess Autonomous Oblast'. The Crimean Tatars, Meskhetians, and Volga Germans, however, were only partially rehabilitated and were not, for the most part, permitted to return to their homelands until after the disintegration of the Soviet Union in 1991.

In 1941, all the colonists who had not yet emigrated from the Volga region were deported by Stalin's Soviet government to Siberia, Kazakhstan, and other remote regions because of their German heritage. The formal decree came on 28 August 1941 which abolished the Autonomous Socialistic Soviet Republic of the Volga Germans.

On 1 September 1941 mass evacuation was announced for the approximately 440,000 Volga Germans. Ten days later they began their forced deportation to Kazakhstan and Siberia. Many were forced to work in the Trudarmee (labor army) in camps such as Kolyma. The Volga Germans were then stripped of their citizenship and did not regain their civil rights until after Stalin’s death.

The Volga Germans were now treated as prisoners and were transported by rail to the camps. There were 151 train convoys departing from 19 stations. Some 20,000 NKVD troops and the huge quantities of rolling stock and other resources were diverted from the war effort in order to shift vast numbers of old people, women and children to distant lands quite unprepared to receive them. Fifty or 60 people were packed into each freight car and given water only when the train stopped every three or four days. Food, when provided, was generally salted herring which only made the prisoners' thirst that much greater. The journey could take many weeks.

The consequences were devastating. Some families were given as little as five or ten minutes to pack up their belongings and food for the trip. No food was supplied. Tens of thousands are believed to have died during journeys which lasted up to two months. In some cases, bodies were left in the overcrowded cattle wagons for weeks on end. In others, they were thrown out beside the tracks. Most estimates indicate that close to 40 percent of the affected population perished.

Many of the transfers took place in fall and winter months. Those who survived the journey often found themselves with inadequate clothing, no shelter, and no means to support themselves in temperatures as low as -40ºC in Siberia. Their movement was restricted to a limited zone always a few kilometers short of the nearest town.

“Perhaps the best account of what happened is given by Victor Leiker, a New Jersey Journalist, who interviewed four natives of the Volga Republic in 1968. The men, ranging in age from forty-nine to fifty-three, made their way to Germany and settled there after the war. Leiker described the evacuation of Ober-Monjou as follows: ‘In Ober-Monjou the order came early in the morning. The people were given four hours in which to prepare for the evacuation. Anyone resisting or attempting to hide would be summarily shot, and a few were. Soldiers arrived a few hours after the order and herded the people to the banks of the river where they boarded barges and were taken to a railhead. Each person, regardless of age, was allowed one suitcase or bundle. Some suspected that they would be sent to Siberia and took all the clothes and bedding they could carry. Others took as much food as they could assemble. In the long run those with the extra clothing and bedding had the best chance of surviving the cold in the north where little or no preparation had been made for their arrival.

At the railhead the people were loaded into freight and cattle cars, some with open vents and some with no vents at all. And so began the long, horrible, and disastrous trip to Siberia. No statistics are available, and we shall probably never know how many died on their trip to the the forced labor camps and how many in the forests, mines, and fields of Siberia. There was only one railroad running through the Volga Republic and it had no branch lines. The people were almost always forced to walk to the nearest railroad station. It can be imagined that many of those not in good health, that many of the old and young, did not make it to the station.”

Walters notes that little is known about banished persons who survived, and he expresses anger that Russia has escaped censure from the international community for what it has done.

In the Volga colonies, all German institutions disappeared. German buildings remained but often were reconfigured for different use. The many contributions Volga Germans made to the region were buried under the hostility toward all things Germanic.

Pohl, J. Otto. (2001). The deportation and destruction of the German minority in the USSR.

Chai-mun, Lee. "The Lost Sheep: The Soviet Deportation of Ethnic Koreans and Volga Germans." The Review of Korean Studies (June 2003). (in Korean)

Pohl, J. Otto. The Deportation and Destruction of the German Minority in the USSR.

Schmaltz, Eric J. Our Memory Is the Future: The Soviet Experience and Remembrance of the August 1941 Deportation of Volga Germans. Presented at the Commemoration of the German-Russian Holocaust on October 25, 2008, at St. Michael's Lutheran Church, Portland, Oregon.