Following the elimination in 1874 of the last vestiges of the promises that had enticed the Germans to settled on the Volga in the 1760s, immigration began to North and South America. A group of approximately 200 families settled in southern Brazil intending to continue raising wheat as they had in Russia. While many found the soils there fertile, they were unsuitable for wheat.

In Argentina, President Nicolás Avellaneda signed the Immigration and Colonization Act (Law No. 817) on 19 October 1876. While it did not nullify opportunities for spontaneous immigration, it created a system whereby land could be equitably distributed to specific groups of European immigrants who were willing to work the virgin lands of the expanses of sparcely populated land in Argentina.

In August 1877, four representatives of the group that had settled in Brazil (Andreas Basgall, Jakob Lechmann, Johann Berger, and Adam Weimann) traveled to Buenos Aires where they met with Bernardo de Irigoyen, the Minister of the Interior. Mr. Irigoyen proposed a guarantee for up to 50,000 immigrants to be allowed into the country. The Volga German representatives, however, were more interested in reinstating some of the privileges that they had enjoyed earlier in Russia. In addition to good soil for wheat cultivation, the final agreement provided the colonists with exemption from military service, freedom to worship as they chose, and freedom to educate their children in the German language. Following ratification of this agreement by the Argentine Congress, immigration began.

On 24 December 1877, the first group (8 families and 3 single men) arrived in Buenos Aires. They arrived by train in Azul, southwest of Buenos Aires, and then proceeded by ox-drawn carts another 35 kilometers to Hinojo Creek where they arrived on 5 January 1878. There they founded the colony of Hinojo in the Olavarria Partido (District).

The colonies have remained largely inhabited by Volga Germans through the years. Even in 2005, approximately 90 percent of the inhabitants of these Volga German colonies are descendants of the original colonists.

The Centro Argentino Cultural Wolgadeutsche (C.A.C.W.) estimates that there were 2 million people of Volga German ancestry living in Argentina as of 2007. Many of these people now live in the larger towns and cities of Argentina.

Gonzales, C. A. (2001). Germans from Russia in Argentina : their history and culture. 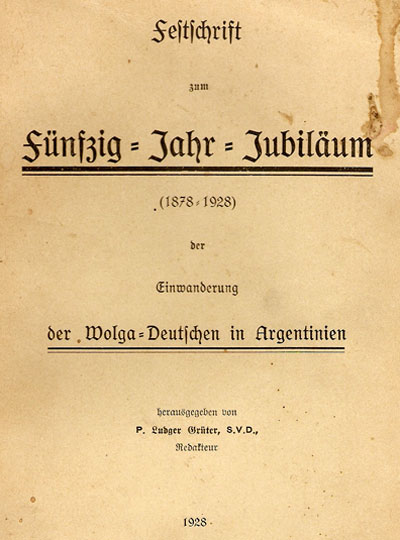