My last blog post discussed the marriages, births, and deaths that occurred while the emigrants destined for the Volga region gathered for their journey.  I'd like to provide two specific examples of how this data can be used to help confirm an origin location, and to identify pairs of siblings who went to Russia.

On the Frank First Settlers List , Johann Georg Weitzel is described as being from "Stengerat". There is no place called "Stengerat" in Germany.  Place names in published translations of the First Settlers List are sometimes non-existent or incorrect places, so this is a common problem that you will encounter in documenting your ancestors.  The Büdingen parish records report the marriage of Johann Georg Weitzel and Anna Elisabeth Mühl on 14 March 1766.  The next marriage, recorded on the same day,  is between Johann Wilhelm Opfer & Eleonore Weitzel.  I wondered is this a coincidence, or are these two Weitzel individuals related?  Neither entry gives an origin location for either couple.

Johann Wilhelm Opfer settled in Dobrinka.  The Dobrinka First Setters List describes him as coming from "Belterstein".  It should not surprise you to learn that there is no place in Germany called "Belterstein".   So now the obvious question is what are the correct place names?  Sometimes you can resolve a misspelled place name  by doing a Google search on the misspelled name and Google might offer you the correct place name.  Another strategy is to use the "sounds like" function in the online version of the Meyers Gazetteer of the German Empire.  Unfortunately, neither of those strategies worked in this example.

The images of the pages of the Meyers Gazetteer of the German Empire are available on Ancestry.  You can search the images on Ancestry by place name (which won't work in this example because the two place names don't exist), or you can browse through the pages.  I paged through he place names that start with "St", and eventually I found a place called Stangenrod.  That place happens to be about a mile away from a place called Beltershain.   So now I have two real place names that sound similar to the misspelled place names in the First Settler's List.  The next question is how do I prove that Johann Georg Weitzel came from Stangenrod, and how do I determine if he is related to Elenore Weitzel?

Lucky for me (and other researchers interested in this family), there is a Familienbuch for Stangenrod.   I talk about Familienbücher (or Ortssippenbücher) in more detail in another post, but basically these are genealogies for a whole town.  If one exists for the place you are researching, you are very lucky because this will save you a lot of time.  Reported on page 145 of the Familienbuch Stangenrod are Johann Georg Weitzel, born 26 Feb 1742, and his sister Eleonore Philippina Weitzel, born 3 Sep 1744. Neither of them is noted as marrying or dying in Stangenrod, so I think it is reasonable to believe that these two siblings are the same as the two Weitzel individuals who went to Russia.

Here is another example of a sibling pair who got married in Büdingen and then migrated to Russia.  Johann Burkhard Bock and Magdalena Stock were married in Büdingen on 5 Mar 1766. Friedrich Krebs and Christina Bock were married in Büdingen on 7 Mar 1766.  Neither of these entries provide an origin location for either the bride or groom.  The Stumpp book reports that Friedrich Krebs was from "Grossenhausen/Gelnhausen", and that Burkhard Bock was from "Altenhausen/Gelnhausen-He".  The First Settlers List for Frank states that Friedrich Krebs was from "Grossenhausen, Hannover" and that Burkhard Bock was from "Altenhaslaz?, Hannover".   Hannover is in Lower Saxony, quite a distance away from Büdingen (where the two couples got married), and from Gelnhausen in Hessen, so the reference to Hannover is probably incorrect.

There is only one place called Grossenhausen in the Meyers Gazetteer of the German Empire.  That place is in Hessen, in the Gelnhausen region.  The parish for Grossenhausen is Altenhasslau.  Altenhasslau sounds similar to the misspelled place names given in Stumpp (Altenhausen) and Pleve (Altenhaslaz), so likely this is the correct place.  Altenhasslau had both a Lutheran and a Reformed church.  A search of both sets of church records shows that Friedrich Krebs, Burkhard Bock, and Christina Bock were all baptized in the Lutheran church there.

I have one more set of siblings that got married in Büdingen in 1766, but I'll save that for another blog post.

Origin of the Weitzel settler in Frank

Origin of the Krebs settler in Frank

Origin of the Bock settler in Frank 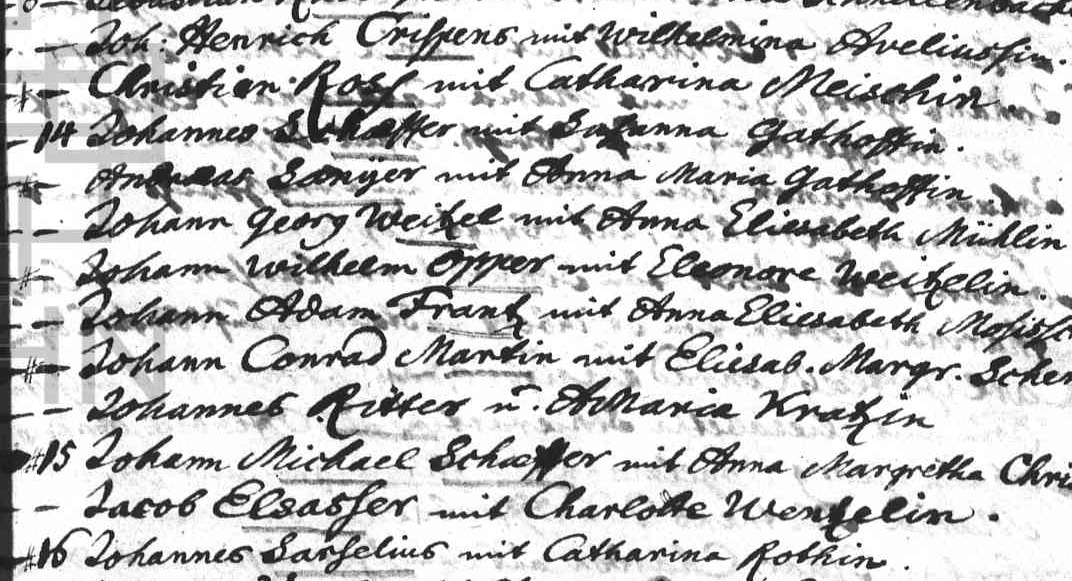