Biography
Father Baumtrog, brother of Father Josef Baumtrog, was born in 1883 in the Volga Region. He attended seminary in Saratov, and was ordained in 1909. He went to the university in Innsbruck, Austria, and completed his studies there in 1911. His first parish was in Saratov. He served the parish in Roshdestvenskaya in the Caucasus from 1914 to 1917. From 1917 to 1919, he served the parish of Mariental. Because of his association with a German-language newspaper, he went into hiding from August 1919 to 1922. He received amnesty and was allowed to serve the parish of Astrakhan from 1922 to 1926. In May, 1926, he was appointed Canonicus and Apostolic Administrator for the Volga region. He was arrested along with 27 other German Catholic priests and taken to the Butyrka prison in Moscow. On 20 April 1930, he was accused of having received money from abroad to aid the Catholic resistance. He was sentenced to death, but was given 10 years imprisonment in a concentration camp in Pokrovsk. He was later relocated to the Solovetsky Island, and according to information from the Polish Embassy in Moscow died in the prison on Solovetsky Island in March 1937.
Photo 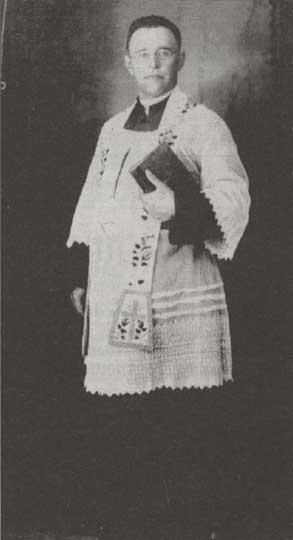