Biography
Reverend Herman Goede was born at Greenleaf, Kansas, on November 23, 1898, the son of Reverend Carl and Henrietta Muller Goede.
After finishing grade school, he enrolled at the Glenvil High School, where he was graduated in the class of 1916. He then entered the Martin Luther Seminary in Lincoln, Nebraska, to study for the ministry. He received his Bachelor of Divinity degree there in 1922, and was ordained as a minister of the United Lutheran Church in America. Reverend Goede also was a student in the graduate school of the University of Nebraska, from which he holds a Master of Arts degree.
On February 27, 1927, Reverend Herman Goede and Miss Irene Hoppold were united in marriage at Doniphan, Nebraska. They have two sons, Gerald H. and Robert W.
In 1922, the Reverend Goede received an assignment as pastor of St. Paul's Lutheran Church at Doniphan, Nebraska, where he served for four years, 1922-1926. From there he went to Blue Hill, Nebraska, where he served a pastor of St. Paul's Lutheran Church, from 1926-1930, he accepted a call to Columbus, where he served for sixteen years as pastor of Trinity Lutheran Church. In 1946, he went to the Frieden's Lutheran Church in Lincoln as pastor.
Besides his work in the Trinity Lutheran Church of the Midwest Synod of Nebraska, Reverend Herman Goede served as secretary of the Northern Conference and secretary of the Library Board. He was very civic minded and participated in civic affairs in Columbus. He served for several years on the Community Chest Board, and in 1944, had charge of the Community Chest Drive. He was a member of the Izaak Walton League, and a supporter of its principles. He was also a member of the Platte County Ministerial Association.
Pastor Goede died 6 June 1976.
Photo 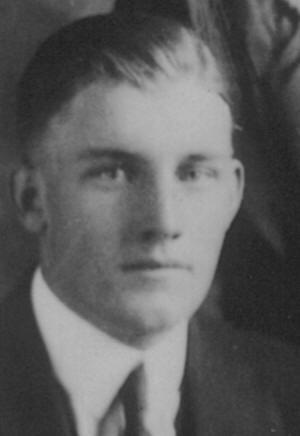