Biography
Dona Reeves-Marquardt traces her ancestry to the Volga German colonies of Kratzke and Grimm. She holds a Ph.D. from the University of Texas at Austin and is Professor Emerita at Texas State University, San Marcos, where she taught German language and literature for many years. Primarily of Volga-German ancestry, she has published articles on the language, history and culture of Germans from Russia and has translated major works in that area, including Peter Sinner’s Germans in the Land of the Volga and Gottlieb Beratz’ The German Colonies on the Lower Volga with LaVern Rippley and Leona Pfeifer. Dona’s parents immigrated in 1876 from Volga villages to Russell county, Kansas. She was a Fulbright scholar at Johannes Gutenberg Universität in Mainz, Germany and has studied and traveled extensively in Germany, most recently with her husband, Lew Marquardt, to her ancestral villages in the Palatinate.
Lewis R. Marquardt was born and raised in North Dakota, the eldest son of a German-Russian father and an Irish mother. He grew up among Black Sea Germans and spent his early years teaching instrumental music in South Dakota, and Interdisciplinary Arts and Humanities at Arizona State University, Tempe. His grandparents immigrated in 1888 from Black-Sea-Kutschurgan villages to Emmons county North Dakota. After the death of his first wife, he married Dona Reeves-Marquardt, a Volga-German, with whom he has traveled extensively in Germany, France, and other European countries, exploring ancestral villages, art museums, Fachwerk, and the phenomenon of foreign culture. He is a charter member of AHSGR.
Dona and Lew are Life Members of both GRHS and AHSGR and have spoken frequently in a dual-lecture format using digital presentations.
Photo 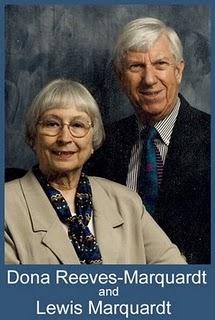