Biography
Gerald “Garry” Reigenborn, son of Joseph and Ellen Mae (Dolan) Reigenborn, was born 27 June 1952 in Julesburg, Colorado. After earning a degree in dance from the University of Utah in 1975, Garry moved to New York City and performed with Andrew deGroat and Dancers. In 1981, he joined the Lucinda Childs Dance Company.
According to The New York Times, "As a dancer, Mr. Reigenborn was the epitome of the deceptively cool Minimalist style that emerged in the dance avant-garde of the 1970s, especially in Ms. Childs’s choreography. Yet the same aesthetic, with its repetitive patterns and complex structures, also has high dynamics, and Mr. Reigenborn, slim, swift and precise in executing steps used in constant permutation, could suggest the explosive force that seemed to boil beneath the surface." He played an influential role in American experimental dance as a choreographer with the Childs Company until 2000, creating 24 works of his own. Garry was also a teacher at the Merce Cunningham Studio from 1995 to 2001 and at Bard College, where he joined the faculty in 1998. He taught in France and Italy from 1990 to 1998.
Garry was diagnosed in 2006 with early-onset Alzheimer’s disease and died in Canon City, Colorado, on 10 March 2011. His ancestors were from the Volga German colony of Schuck.
Photo 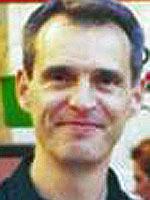