Biography
Father Ildephonse was born in Trautenberg, Bavaria, on 27 July 1888. He came to the United States in 1904. After spending two years with the Benedictine Fathers of St. Vincent's Archabbey, Latrobe, Pennsylvania, as a brother of candidate and novice, he began his ecclesiastical studies with the Capuchin Fathers in St. Fidelis Prepatory Seminary, Herman, Pennsylvania. He studied philosophy in St. Fidelis Seminary, Victoria, Kansas, and completed his theological studies in Sts. Peter and Paul monastery, Cumberland, Maryland. He was ordained 22 September 1918 in Mt. St. Mary's Seminary, Emmitsburg, Maryland. His first appointment was as assistant priest in Sts. Peter and Paul Parish, Cumberland, Maryland. In 1921 he was transferred to Charleston, West Virginia, to take care of the missions in the coal fields.
In 1923 he went to Marienthal. Three years later, he was made superior and pastor of the Marienthal parish, in his pastorate a new school was erected. For one year he served as superior and pastor of Sacred Heart Parish in Ness City, and then he traveled east to Pittsburgh, Pennsylvania, to act as chaplain and business manager of Toner - an institute for homeless boys. In 1933 he returned to Kansas being made superior and pastor in Ellis. In 1936 he was appointed pastor of St. Fidelis Parish in Victoria, Kansas, and in 1939 became superior and pastor of Sacred Heart Parish in Frontenac, Kansas.
Photo 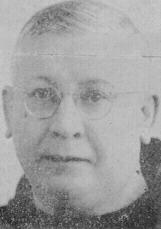