Biography
Florentina Seitz, better known as "Sister Bernarda," was born in General Acha, La Pampa Prov., Argentina, on 19 June 1927. She was daughter of Heinrich and Barbara (Staub) Seitz. She entered a convent of the Holy Cross at age 16. She spent 1986-87 in Germany and Switzerland where she rekindled her love of cooking German food. She returned to Argentina and became the star of a culinary TV program where she made German recipes (not necessarily Volga German), and shared her beliefs and feelings about God, church, love, and family. The program was called "Sweet Temptations" and was carried on the cable channel Elgourmet.com for several years and on the "air channel" América 2.
Sister Bernarda was also an author. One of her books, Sister Bernarda's 100 recipes: kitchen and meditation, is among the 4 best selling books in Argentina.
She died in Quilmes, Buenos Aires Prov., Argentina, on 16 June 2014.
Photo 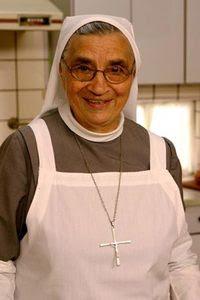