The Rev. Wilhelm Stärkel was born in Norka on 13 December 1839, son of colonists Heinrich S. Stärkel and Amalie Knippel. Until 1859, the surname appears to have been spelled Störkel. He married on 4 July 1868 in Norka to Beate Bonwetsch, daughter of Pastor Christoph Heinrich Bonwetsch, who was serving in Norka at the time, and Beate Christiana Friederich. From 1855 to 1858, he served as the colony clerk in Bangert, part of the Kukkus parish at that time. He began is theological study at the Mission Institute in Basel, Switzerland, on 9 September 1858 and was ordained on 17 July 1864 in Ravensburg, Württemberg (Germany). From 1864 to 1867, he served a parish in Kenosha, Wisconsin. From 1867 to 1868, he was in Burlington, Wisconsin. He returned to Russia and became the pastor of the Eckheim parish on the Wiesenseite where he served from 1869 to 1877. In 1877, he became pastor of the Norka parish, and served there until 1908. He retired in Norka and remained in the parsonage.

Excerpt from "Memories of Norka" by Conrad Brill

"The preachers we had that I know of from family discussions start with Reverend Bonwetsch, who watched Wilhelm Stärkel as a youth playing the game of that day called Gausa. A game where you tossed barnockels (chestnuts) taken off the legs of dead horses, and played somewhat like marbles in later years. He took Stärkel and had him schooled to be a preacher, and Stärkel later married Beate Bonwetsch. When Reverend Stärkel became senile they put in Reverend Weigum and semi-retired Stärkel. When Weigum left, we got a young Reverend Wacker. My grandfather used to tell me how good Stärkel was at playing Gausa, and how Reverend Bonwetsch always remarked that Willie would make a good preacher for Norka.

Reverend Stärkel had come to the United States in the 1860s, as well as Jerusalem. He was instrumental in villagers leaving Russia to come to America, as well as organizing the Brethren of the Versammlung. While I was in the army, he became lost in a snowstorm between Huck and Norka, when he wandered off toward Huck, rather than go to the church in Norka to assist Reverend Weigum with communion. He hadn't shown up at the church and when they sent for him, his daughter said he had left hours ago. They found him and he survived, but died of natural causes before I got home from Turkey." 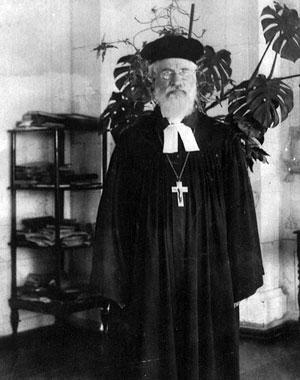 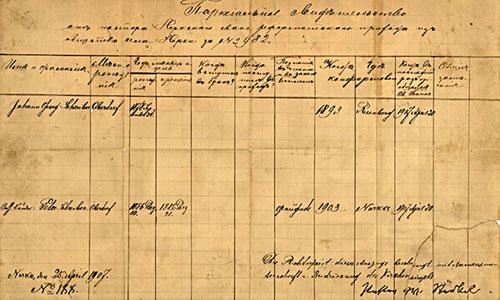 Parochial certificate from the colony of Norka for Georg and Peter Schreiber. The certificate was signed by Rev. Stärkel on 25 April 1907. Source: Steve Schreiber.
Sources