After 7 years of wrestling as an amateur, under his given name Jake Pappenheim, Jake entered the arena of professional wrestling on January 3, 1944. He soon became well known throughout the Pacific Northwest and subsequently established a name for himself in the annals of professional wrestling as Kurt von Poppenheim (he legally changed his name in 1958). During his career, a variety of aliases were used including Eric von Hess, Jack Pappenheim, Jack Poppenheimer, and Kurt von Poppenheim. His enduring talent, stamina, and excellent physical condition enabled him to sustain an outstanding 19 year, 4 month professional career, from which he retired on May 10, 1963. During his wrestling career, he competed in 1,122 matches—fewer than 2% of professional wrestlers have competed in more than 1,000 matches—in various venues throughout the U.S., including New York City’s world famous Madison Square Garden.

Jake Pappenheim, son of Jacob Pappenheim and Maria Elisabeth Linker, was born 28 March 1914 in Portland, Oregon and died there on 1 May 2003. His ancestors come from the Volga German colonies of Brunnental and Hussenbach. 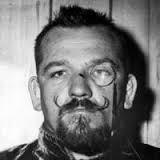