In 1894-97, 1899-1901, he was a student of theology in Basel. From 1903-05, he was pastor of the separatist congregation Neu-Hoffnung in Taurida (Russia). He was ordained in Neudorf in the Province of Cherson on 2 July 1906 and served there as pastor from 1906-1910. From 1910-1913, he served the parish of Norka. In 1913, he moved to Appenzell, Switzerland, from where he served the Reformed diaspora congregation in Appenzell-Inner-Rhoden until his retirement in 1937. In retirement, he lived in Riehen, near Basel, Switzerland.

Shown below is a copy of the official document appointing David Weigum as pastor at Norka. This was the standard appointment form for all pastors under the jurisdiction of the Moscow Evangelical-Lutheran Consistory, which included those serving in both Lutheran and Reformed parishes in the Volga region.
The appointment, formally, came "on command" of the Tsar himself, His Imperial Majesty, the Autocrat of all the Russians, etc., etc., but was made through the Moscow Evangelical Lutheran Consistory. Translated from the Russian, the document reads as follows:

Pastor David Weigum, having been called as preacher by the parish of Norka and having been confirmed in office through an order of the governor of Saratov on 12 July of this year, is hereby installed as pastor of the parish of Norka, situated in the Kamyshin District of the Province of Saratov, with the duty to serve faithfully the parish entrusted to him, on the basis of Holy Scripture and according to the liturgical books of the Evangelical-Lutheran Church, in exact fulfillment of church law, with pure doctrine and the administration of the sacraments, and in all other obligations, and to give good example by an irreproachable life, such as is expected of a servant of Christ and such as he can answer for before God, his conscience and the authorities. In return he is assured of all the rights that are his as pastor of the parish of Norka and is granted all the needed protection of the authorities.

Moscow, 29 July 1910.
Seal of the Ev.-Luth. Consistory
Signatures of Consistory Officials and the Pastor 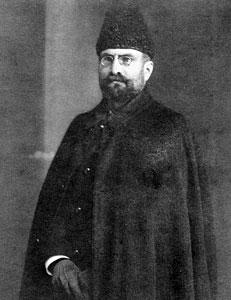 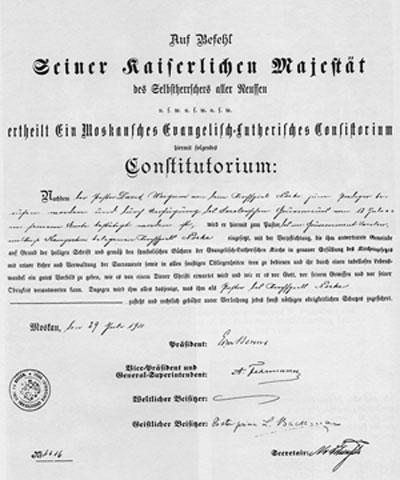