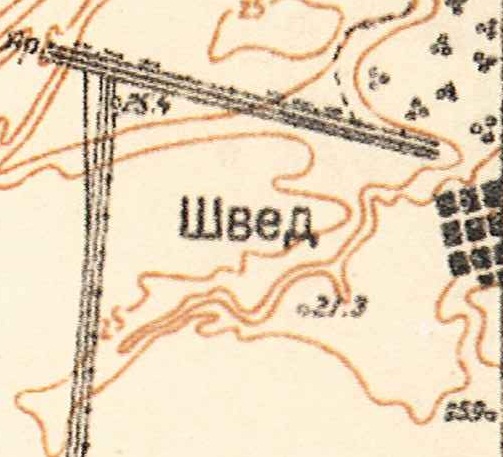 Originally the Lutheran congregation in Schwed was part of the Rosenheim parish which had been established in 1767.  A new wooden church building was completed there in 1872.  It was closed by the Soviet government in 1930.  The building stood until 1990 when it burned.  The stone foundation is all that remains.

Schwed was founded as a Lutheran colony on 27 July 1765 by the Government.  The 24 founding colonist families came from Sweden, Saxony, Nuremburg, and Danzig.  Enough of the original settlers were from Sweden that the colony was named Schwed.  By decree dated 26 February 1768, Schwed was given the official Russian name of Svonarevka.  Immigration to America began in 1870.  During 1877-1878, 61 individuals left the colony for America.

Pleve, Igor R. The German Colonies on the Volga: The Second Half of the Eighteenth Century , translated by Richard Rye (Lincoln, NE: American Historical Society of Germans from Russia, 2001): 318.

Report of Conditions of Settlements on the Volga to Catherine II by Count Orlov, 14 February 1769.