Where is Hanau?  That might seem like a silly question.  Anyone with a computer can search for "Hanau" and learn that it is a city in Germany, just east of Frankfurt.  "Hanau" might also refer to a region in Hessen that was formerly known as the County of Hanau.

But this is Volga German genealogy research, and it isn't always that simple.

The Batt family is on the Kulberg Lists, on the same ship as a number of other families who also settled in Dietel.  The Kulberg List entries for these families (including Batt) state that they were from Hanau.  The Dietel First Settlers list reports the following origin locations:

Lucky for us, there is only one place in Germany called Kork.  If you locate Kork on a map, you will see places called Holzhausen, Linx, and Neumuehl nearby.  Clearly this is the correct part of Germany.  But this is in present day Baden-Württemberg, just a few miles east of the French border.  This is nowhere near either Hanau or Darmstadt.

How do we resolve this apparent discrepancy in origin locations?

There are many genealogy-focused Facebook groups for specific regions in Germany.  I posted in the Baden-Württemberg group, describing the various mangled place names that were reported for the Batt family, and explaining that the place had to be somewhere near Kork, Neumuehl, Linx, and Holzhausen.  One of the members of that group immediately knew the correct place name:  Rheinbischofsheim.  Not only did this researcher identify the correct place, he told me that the local church had put all of its birth, marriage, and death registers on their web site.  With a little work, I was able to locate the records for all of the Batt family members who emigrated to Russia.

At this point you might be saying "wait, this post is supposed to be about Hanau, not Baden-Württemberg!"  Indeed, Hanau is the topic of this post.  Rheinbischofsheim and the nearby towns were historically part of Hanau-Lichtenberg,  which was originally part of the County of Hanau.  This area was controlled by the Hessen-Darmstadt Landgraviate when our ancestors departed for Russia in 1766.  It became part of the Grand Dutchy of Baden in 1803.  This region in Baden-Württemberg is still known as "Hanauerland” today.

You can find a summary of the Batt/Bath/Bott German Origin research here. 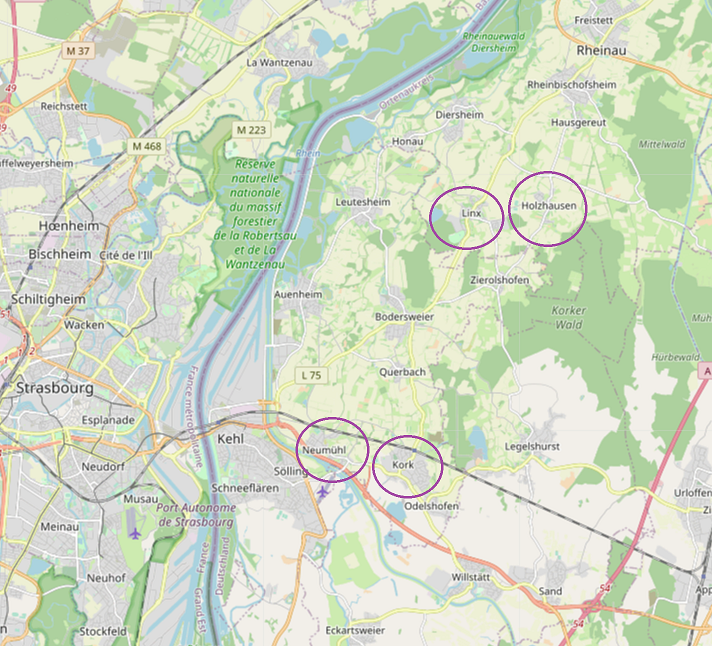