Johannes Baumgärtner was born in Lützelsachsen and baptized in the nearby Reformed parish church at Weinheim on 10 September 1727. Johannes is the son of Johannes Christoph Baumgärtner and Eva Nachbar (Johannes Christoph’s second wife). At the time, Lützelsachsen was part of the Kurpfalz (Electorate of the Palatinate) in the Oberamt (administrative district) of Heidelberg.

The St. Laurentius Catholic Church in Weinheim was taken over by the Reformed and Lutheran parishioners in 1565. They continued to use the church until 1693 when the Catholics reclaimed it. The Reformed parishioners no longer had a church although they represented a majority of the population. After 1693, the Reformed church services initially took place in a hall of the Rabenhauptsche Hof in Münzgasse, until Baroness Marie Dorothea von Gemmingen bequeathed a barn in the Judengasse to the congregation in 1704. The barn was expanded into a provisional church which was used for over 20 years. In 1726, the municipality acquired a plot of land near the market square. In 1731, the foundation stone was laid and five years later, on the 4th November 1736, the first service took place in the new Evangelische Stadtkirche.

About 1754, Johannes married Anna Catharina (surname unknown). The marriage records for Weinheim are missing for this time. From this marriage, two children were born in Lützelsachsen and baptized at the Weinheim Stadtkirche:

In early 1760, the Baumgärtner’s migrated north to Denmark under the colonization program of King Frederick V. They arrived in Fridericia (Jütland) on 1 May 1760. By December 1760 they had settled in the colony of Friderichsmose in Amt Silkeborg.

A son, Johann Leonhardt, was baptized on 5 October 1760 in the Thorning parish of Amt Viborg.

A daughter, Maria Johanna, was baptized on 13 March 1763 in the Thorning parish of Amt Viborg. The baptism record notes that the Baumgärtner's are colonists.

Due to extremely difficult agricultural conditions in Denmark, many colonists chose to migrate to Russia seeking better living conditions under the 1763 Manifesto of Catherine II. The Baumgärtner’s departed from Denmark on 26 April 1763 and likely traveled directly to Lübeck, a gathering point for colonists on the Baltic Sea. At Lübeck, the family boarded a ship bound for Kronstadt, an island fortress in the Gulf of Finland near St. Petersburg. From Kronstadt they were taken by oared boats to Oranienbaum on the mainland of Russia. Here their long journey to the lower Volga settlement area began.

After a more than a year of travel, the entire family arrived in the colony of Anton on 7 September 1764. They are recorded there in the 1767 census as household 21. Another daughter, Eva Catharina, had joined the family. She was born about 1765.

The 1775 census of Anton lists Johannes, Anna Catharina, and all the children, except Anna Margaretha who had married Johann Busek from Kukkus by this time. Two more children joined the family, a daughter, Catharina, born about 1771 and a son, Jakob, who was born about 1773.

Weinheim (including Lützelsachsen) parish records on Archion.de and FamilySearch.org 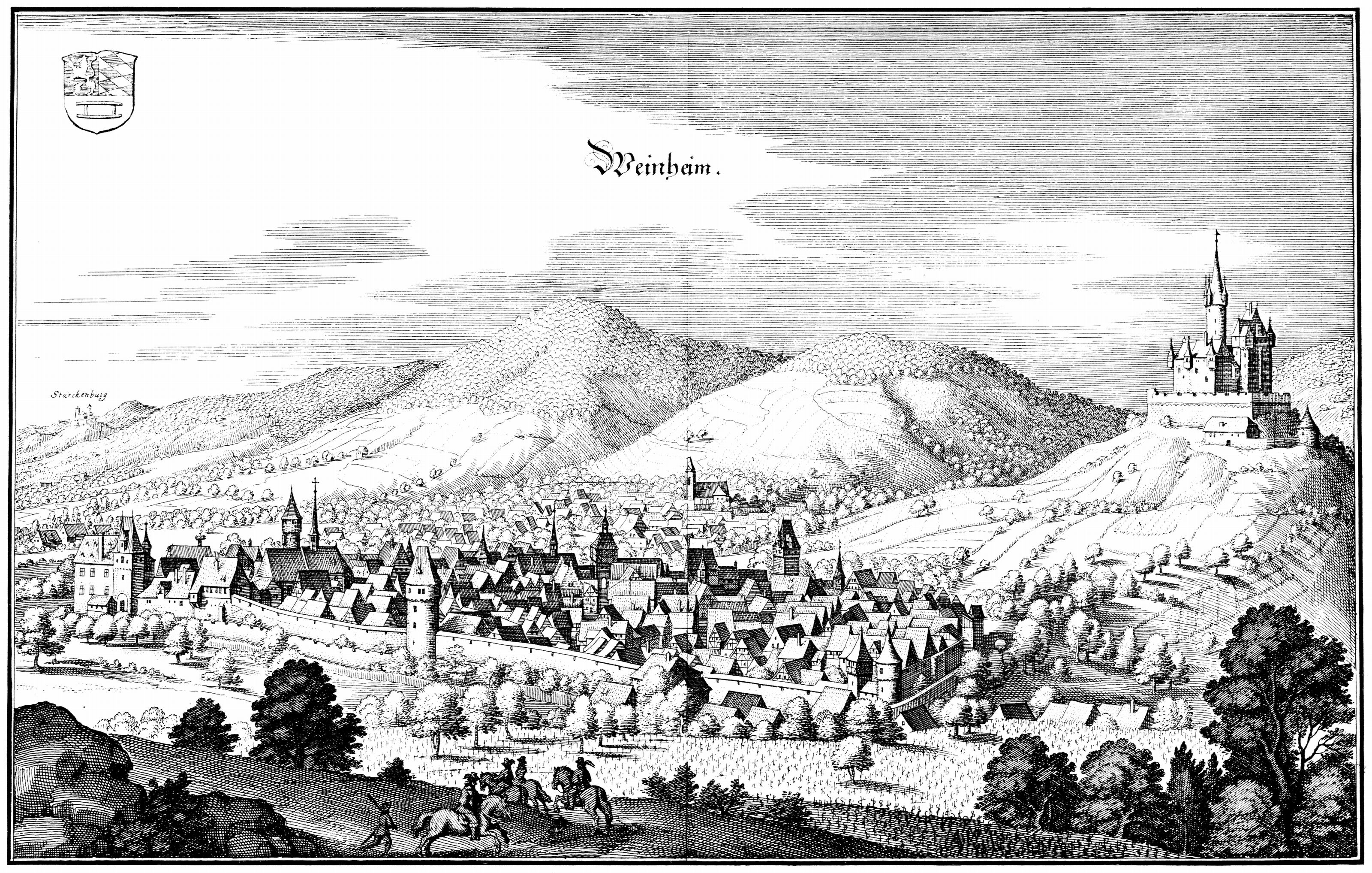 Engraving of Weinheim in 1645. Source: Wikipedia. 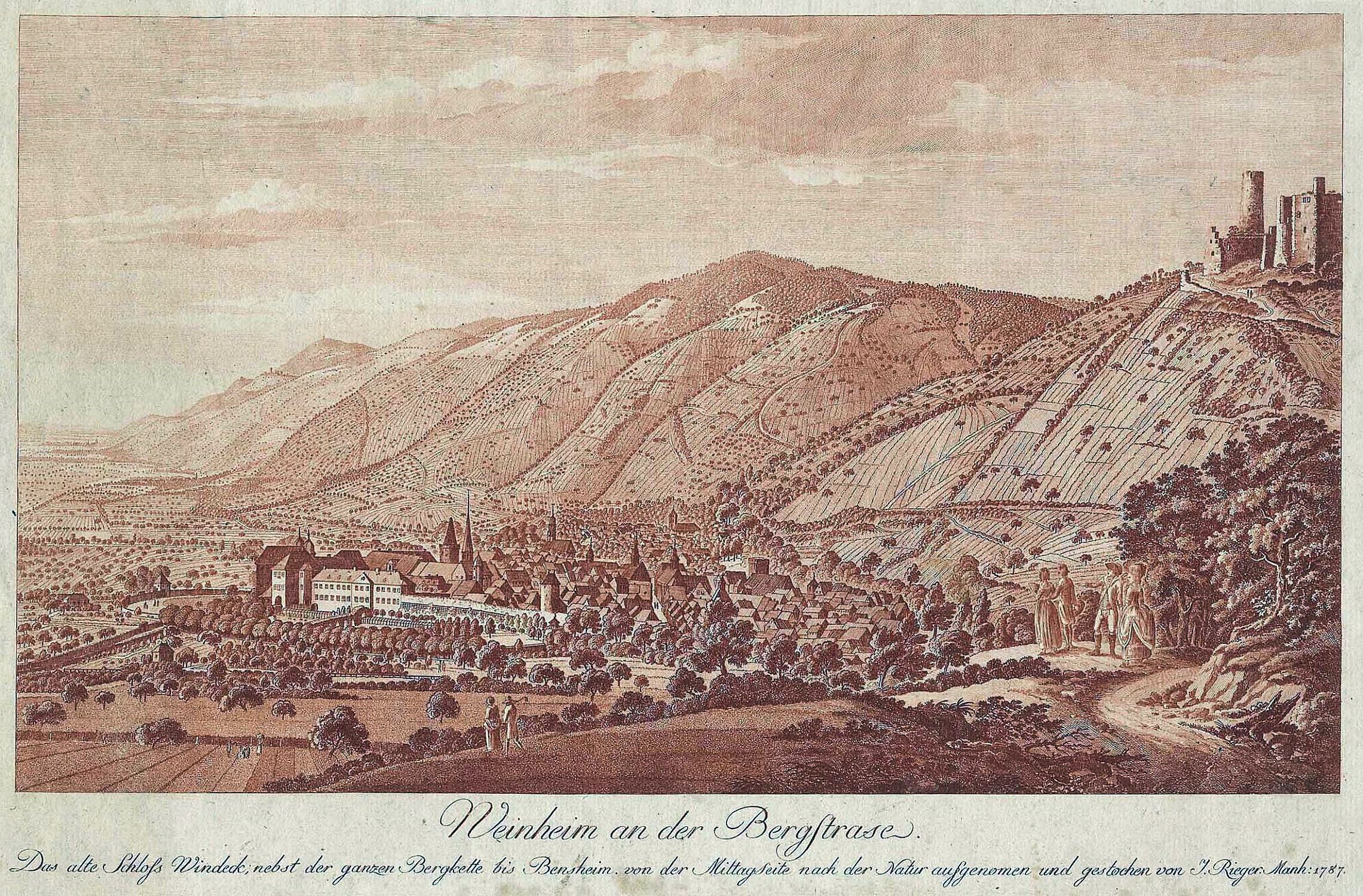 Engraving of Weinheim in 1787 by Johann Jakob Rieger. Source: Wikipedia. 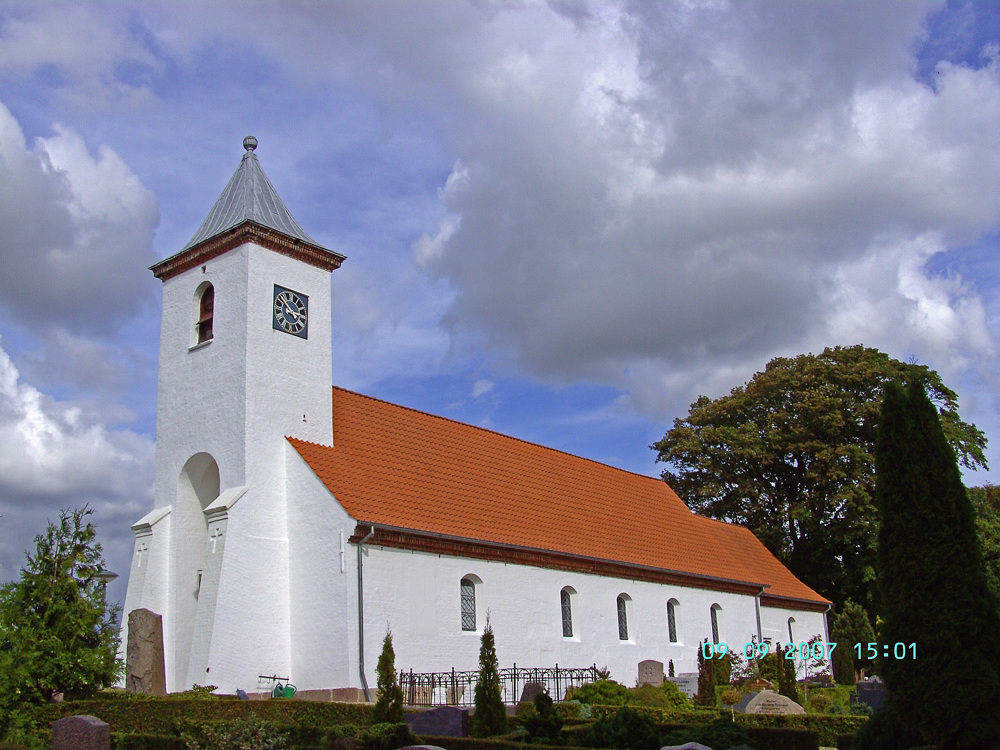