Johann Jacob Schmer was born on April 9, 1728 in Heddersdorf, Hersfeld-Rotenburg, Hessen, Germany and baptized on April 11, 1728 at the parish church in nearby Frielingen. He is the son of Johannes Georg Schmer and Otillia Seebold who married in Frielingen in February 1727.

Anna Eva Glebe was born in nearby in Biedebach, Hersfeld-Rotenburg, Hessen, Germany and baptized in the parish church in Obergeis on March 28, 1724. She is the daughter of David Glebe and Margaretha Will. Anna Eva was confirmed in at the parish church in 1737. Her confirmation record notes the date April 4, 1923, which is probably her birth date.

Johann Jacob and Anna Eva were married on Saturday, October 1, 1748 in Frielingen after their marriage proclamation had been read aloud the three previous Saturdays. Three children were born in Heddersdorf and baptized at the parish church in Frielingen:

In the spring of 1766, Johann Jacob and Anna Eva Schmer decided to accept the offer to settle in Russia that was described in Catherine's Manifesto.

The couple sailed with other colonists from the Baltic seaport of Lübeck aboard the barque “Fortitudo" commanded by John Scott and arrived in Oranienbaum, Russia on July 19, 1766.

Over a year later, Jacob, Anna Eva, and their three children were among the founders who arrived in Norka on August 15, 1767 and are recorded there on the 1767 Census of Norka as Household No. 143.

Johann George married Anna Maria Hertner about 1773 and they had eight known children.

According to the 1775 census of Norka, Jacob was serving as a Beisitzer for the colony of Norka.

Later census lists show that descendants of the Schmer family from Norka moved to the colonies of Neu-Beideck, Oberdorf and Unterdorf.

The 1775 and 1798 Censuses of the German Colony on the Volga, Norka: Also Known as Weigand. American Historical Society of Germans from Russia, 1995. Household 4. 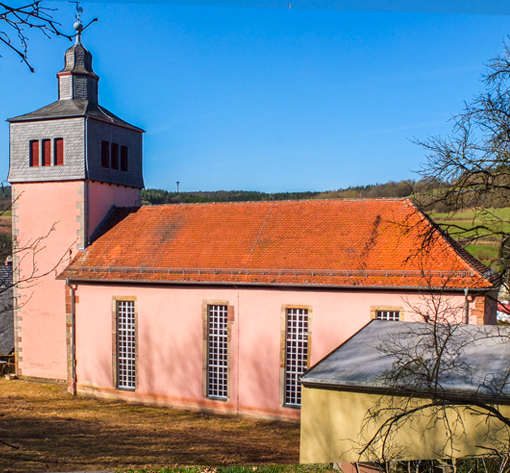 The Frielingen church, which dates to around 1600, is known for its pink exterior. Source: Evangelical Parish Kirchheim & Frielingen/Willingshain website.