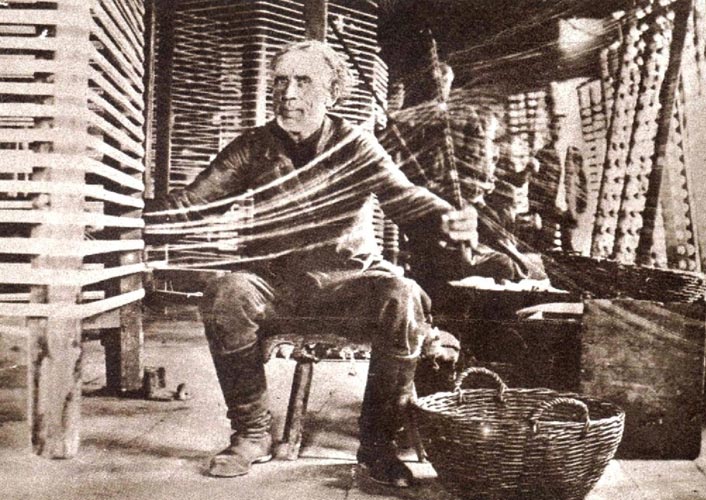 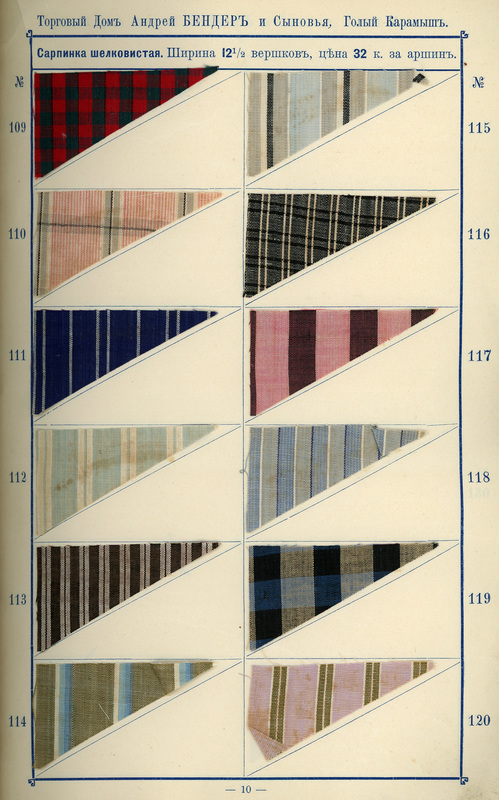 Cloth samples from the 1912 sarpinka catalog from the Andrew Bender company located in the colony of Balzer. Source: Steve Schreiber.

The colonists in Sarepta were responsible for introducing the manufacturing of a choice gingham material to the Volga German region. A group of weavers had been among the original settlers in Sarepta, weaving silk and wool cloth. They soon swiched to weaving with cotton and their high quality product became known as sarpinka, after the nearby Sarpa River, and Long reports that "throughout Russia this cloth became synonymous with sturdy calico" (p.140).

Originally, the colonists in Sarepta did all the spinning, warping, dyeing, and weaving by themselves, but as demand for the material increased, they brought in workers from the other Volga German colonies. Colonists were also sent to Sarepta to learn the trade. A large weaving operation was established in Norka in 1810. In 1816, the Sarepta weavers moved their operation upstream to the city of Saratov, but after a couple of devasting fires, they moved it thirty miles southwest of Saratov to be closer to the operation in Norka.

Long reports that by 1837, there were about 1,000 weavers in the colonies, working mostly on looms in their homes between October and April of each season. A cloth merchant, the fabrikant, handled the purchase of thread and dye as well as the actual dying of the yarn. The indigo-colored yarn was then distributed to the cottage-industry weavers who make the cloth. Each fabrikant could have 150-200 looms working for him. The colonies in the Kamyshin District monopolized the industry where in 1888 twenty-four colonies were home to 7,000 looms and 5,742 weavers. The dying and warping factories in Balzer and Messer dominated the industry. As late as 1911, there were twenty-seven dye and warp works in Balzer.

Three fabrikant families (the Borels in Balzer, the Schmidts in Messer, and the Reinachs in Kutter) controlled most of this industry. Over time, major operations were also begun in Dönhof, Grimm, Huck, and Norka were also established, but the sarpinka industry remained in the hands of only a few families. There were only seventeen families controlling the sarpinka business at the outbreak of World War I, and of those five families employed 60 percent of the weavers.

A 1912 sarpinka catalog from the Andrew Bender company located in the colony of Balzer. 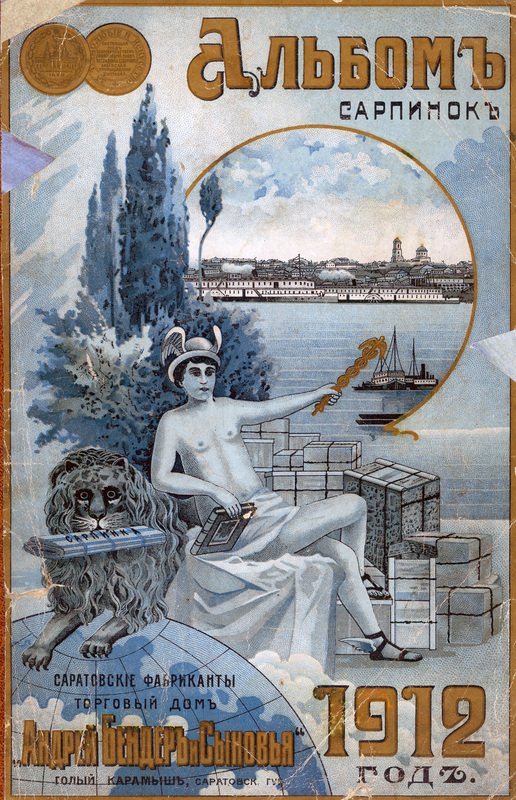 Koch, Fred C. The Volga Germans: In Russia and the Americas, from 1763 to the Present (University Park: Pennsylvania State University Press, 1977): 33.