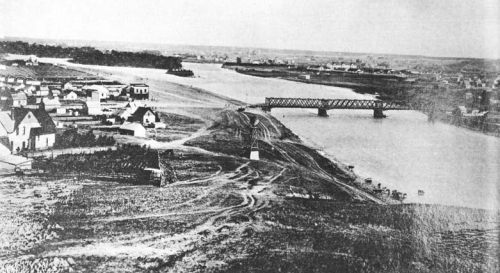 View of Germantown looking east towards Calgary; the Langevin Bridge connecting the village to the rest of Calgary (ca. 1900) Source: "Calgary, Then and Now," p. 113.

The first group of German-speaking immigrants arrived in Calgary in 1892 from Yagodnaya Polyana having first gone to Endicott, Washington . Another group of Volga Germans arrived around the turn of the century from Alexanderdorf (Caucasus), where their ancestors had moved several decades earlier.  They settled in an area northeast of downtown Calgary that became known as Riverside but was called Germantown during the early settlement years.  This area was annexed to the city of Calgary in 1910.

The following families are know to have immigrated to Calgary: