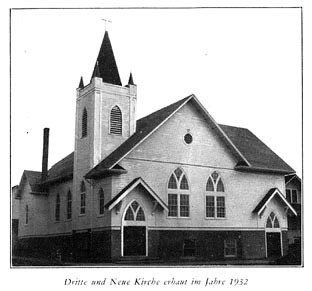 Under the direction of the Rev. Heinrich Hagelganz, a group of 29 Volga Germans met on 22 June 1913 to organize the Second German Congregational Church in Portland, Oregon.  In the same year the congregation became affiliated with the Congregational denomination.  The new congregation made arrangements with a Seventh Day Adventist Church to use their building on Sunday as a place of worship, while their own new building was being erected at NE 8th and Skidmore Streets.  In 1921, the church voted to enlarge their structure by lengthening it 30 feet, and by putting in a full basement to house the rapidly growing Sunday school.  During the tenure of Pastor Zorn, a parsonage was purchased next to the church.  In 1931, the building was enlarged again to provide a seating capacity of almost 600 people.

The church was remodeled during the pastorate of J.S. Gyorog.  In 1952, the congregation purchased 2 acres at NE 55th and Alberta for use as a future building site.  In 1960, the old church was sold (it now serves the congregation of Allen Temple Christian Methodist Episcopal Church), and ground-breaking ceremonies were held in January 1961 at the new location.  Regular services were held at the Cascade College Chapel until the new church was completed.

The new church was dedicated on 8 October 1961 and the name of the church was changed to Evangelical Congregational Church.  Over the years the congregation changed its name again to Central Evangelical Church and finally in 2003 to Word of Life Community Church, affiliated with the American Baptist Churches of Oregon.

Following declining membership and attendance, the congregation decided to disband.  Its final service was held on Easter Sunday, 24 April 2011. The building was sold to Morning Star Missionary Baptist Church, the congregation that had occupied another historically Volga German congregation's former facilty, that of Trinity Lutheran Church, until it was destroyed by fire in 2007.

The History of the Evangelical Congregational Church (revised 18 November 1969) by Jack Hagelganz.

The Chronicle of the Church: The History of the Second Congregational Church in Portland, OR from Its Organization to the Year 1927 by Reverend Heinrich Hagelganz.