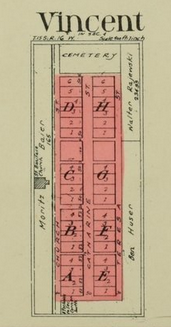 The town site for Vincent was planned and platted about 5 miles south and 2 miles east of Victoria in 1910 after St. Boniface Catholic Church was established in 1907. It was named after Father Vincent Brandt who had been the founding priest of St. Boniface. The town never really materialized although there were a school and a grocery store there for a while.