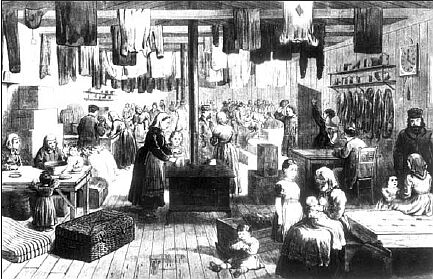 Temporary Housing for Volga Germans in Central Kansas (1875). Based upon the date, this is probably a group of Mennonites coming through the Immigrant House in Topeka. Source: March 20, 1875 issue of Leslie's magazine (New York).

A large group of Catholic emigrants from the Volga arrived in Baltimore, Maryland, on 23 November 1875 aboard the SS Ohio. They came from the colonies of Herzog, Katharinenstadt, Liebental, Beauregard, Ober-Monjou, Neu-Obermonjou, Mariental, Louis, Marienberg, and Graf.

The group arrived by train in Topeka on 28 November 1875. Some of them moved to Western Kansas and founded the town of Liebenthal in Rush County on 22 February 1876. Other members of the original group in Topeka left for Ellis County to found the town of Catharinein March and Herzog in April. Of this first group, only one family remained in Topeka.

In 1877, another group of Volga German immigrants arrived in Topeka and many of those settled permanently there.

The following Volga German families are known to have settled in and around Topeka: