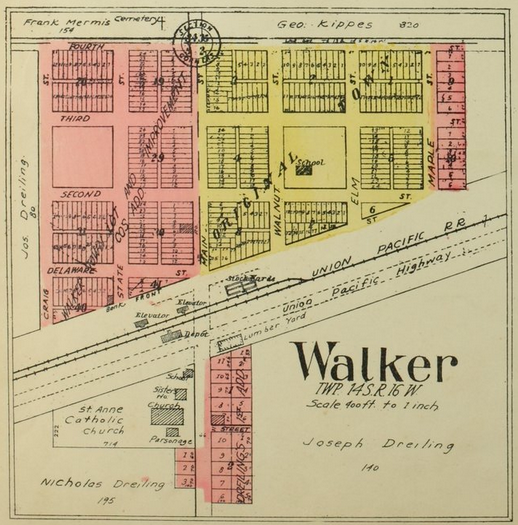 Walker is an unincorporated community located in Herzog Township of Ellis County along the Union Pacific Railroad about 4 miles northwest of Victoria. Settlers from Ohio arrived there in 1872. Volga Germans arrived in the area in 1876. A school was built there in 1893.

In 1942, the Army Corps of Engineers built an airfield 2.5 miles northwest of Walker as a satellite field for the Smoky Hill Army Airfield in Salina. Three concrete runways were constructed. At its height in August 1944, there were over 6,000 personnel affiliated with the Walker-Hays Airfield (also known as the Victoria-Pratt Airfield). It was used for training crews to fly B-29 bombers. Following the end of the war in 1945, the airfield became inactive on 31 January 1946.

Transcript of The Golden Jubilee of German-Russian Settlements of Ellis and Rush Counties, Kansas, 1926