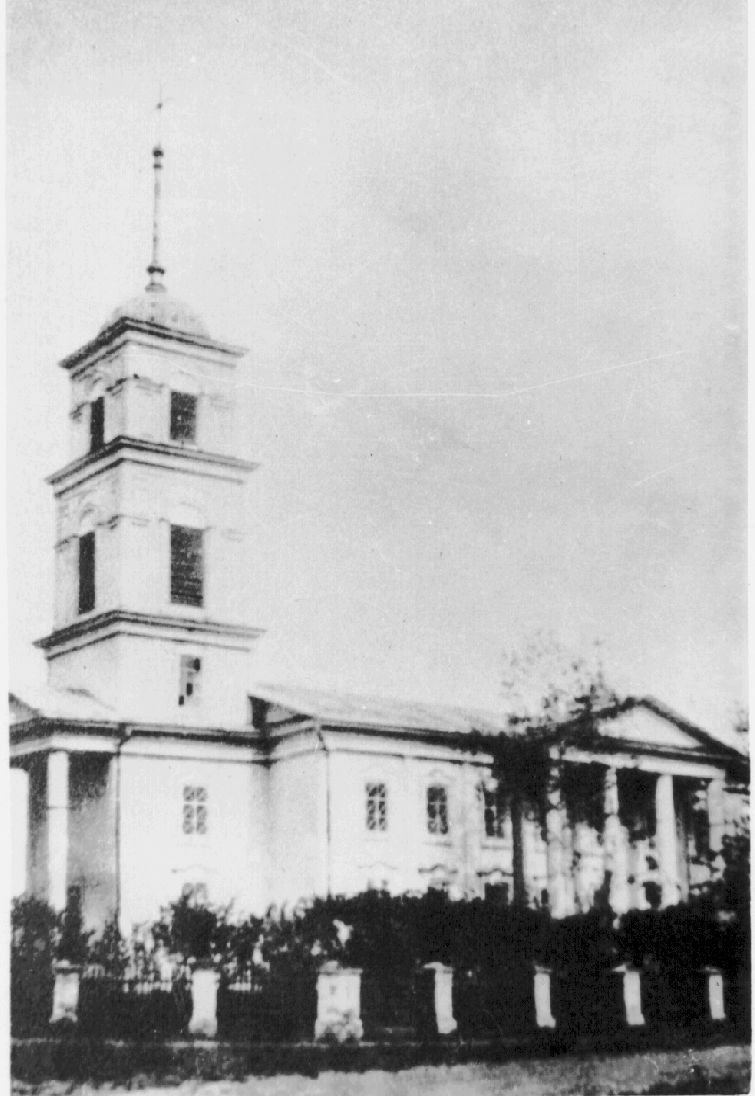 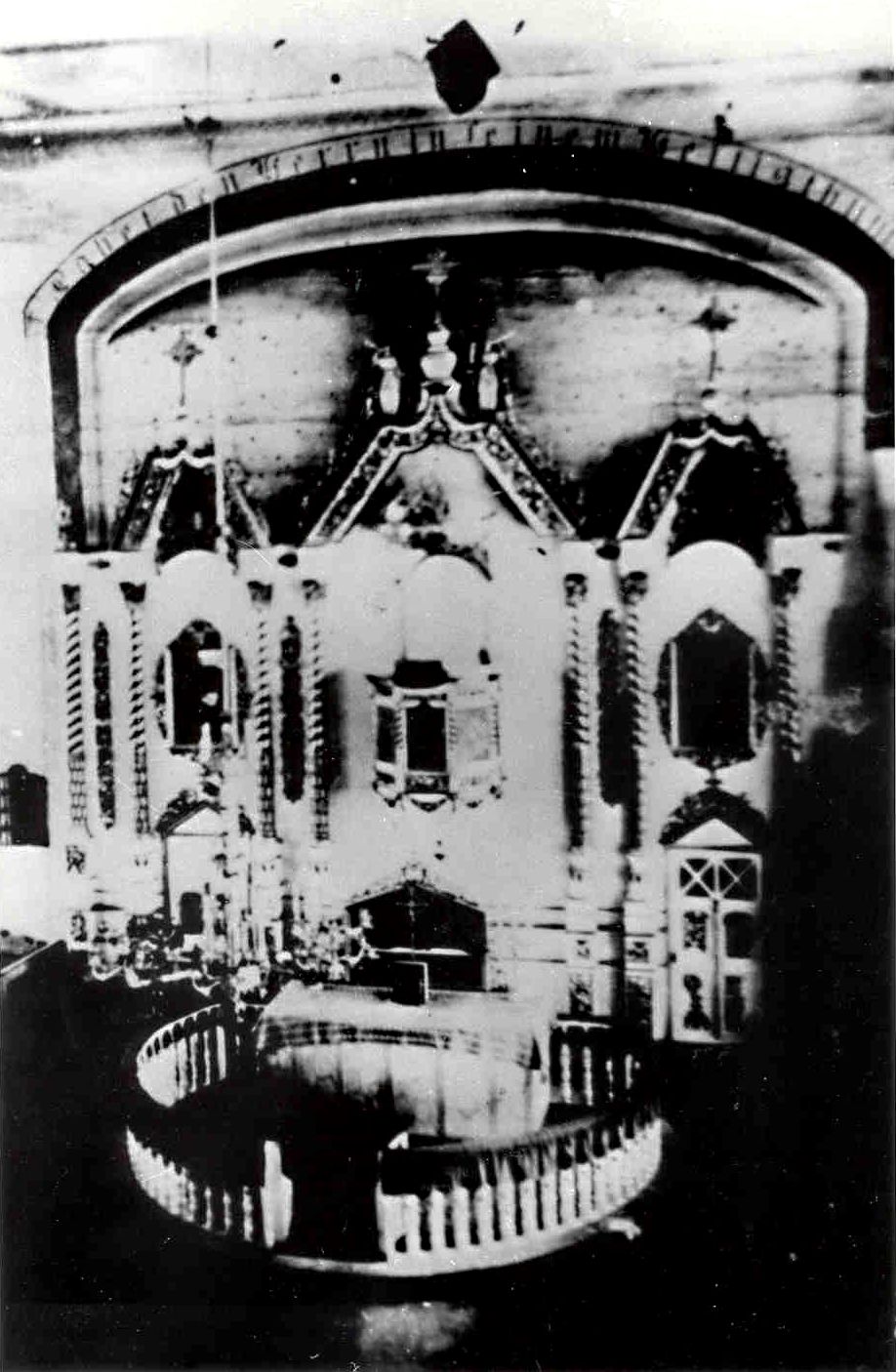 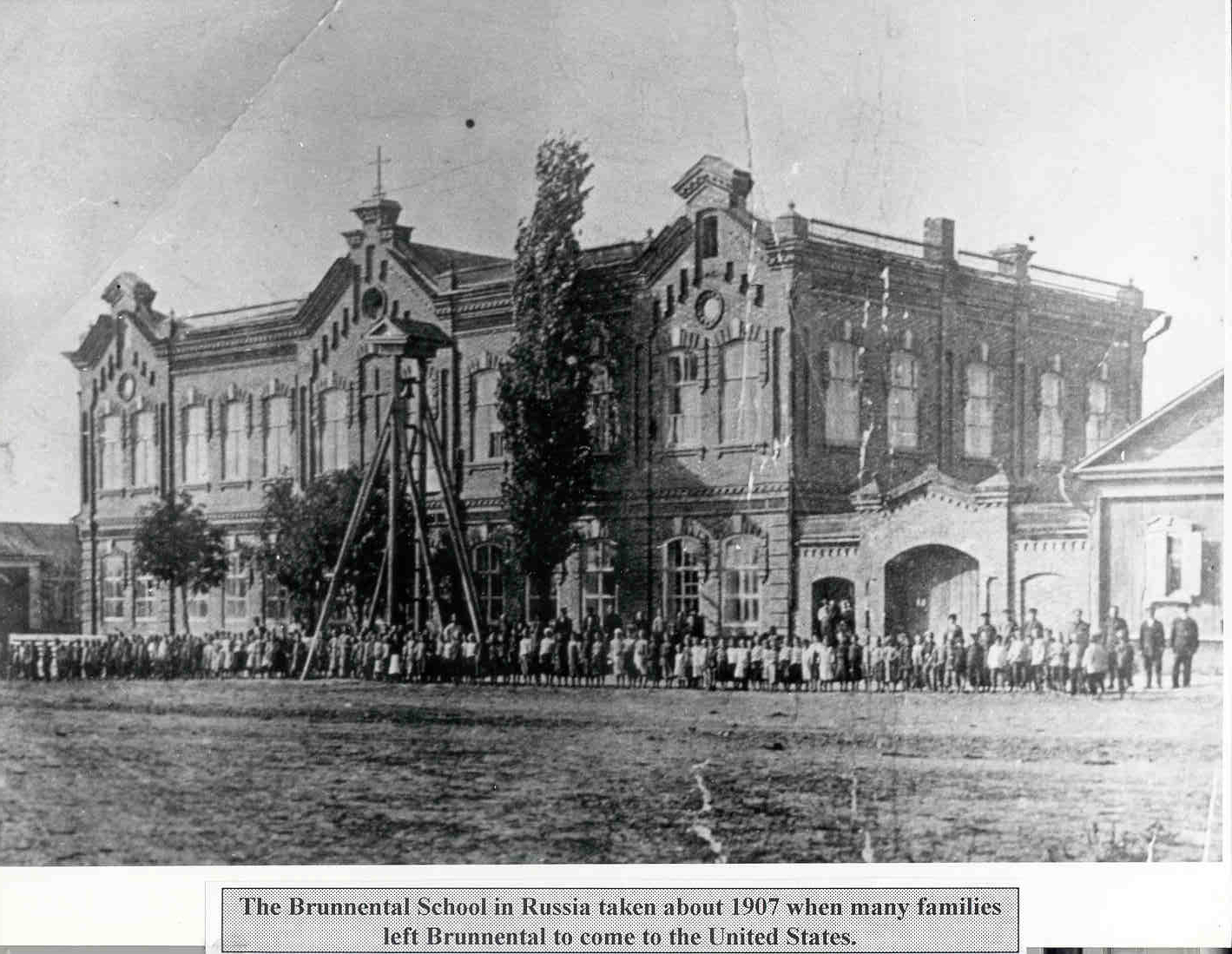 According to Mrs. Becker and Marie (Greenwald) Bandey, this photograph was taken in 1907 in front of the Brunnental School when a large number of Brunnentaler's were leaving for the USA. It was a "farewell photo" for these families. 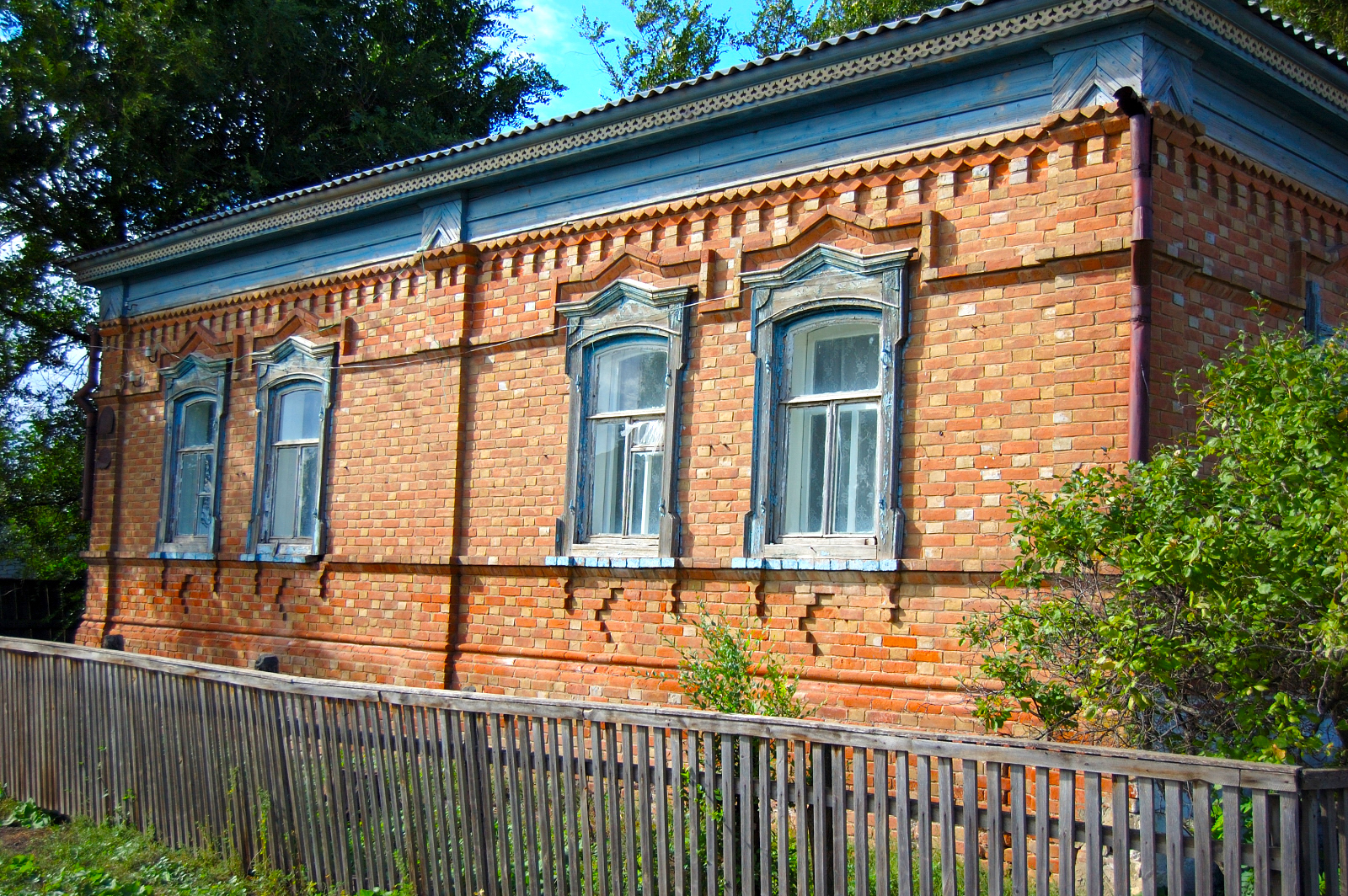 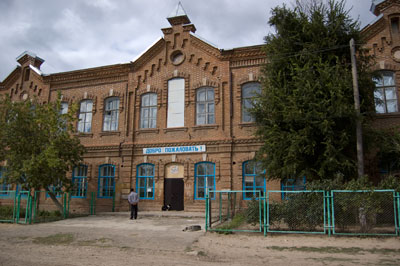 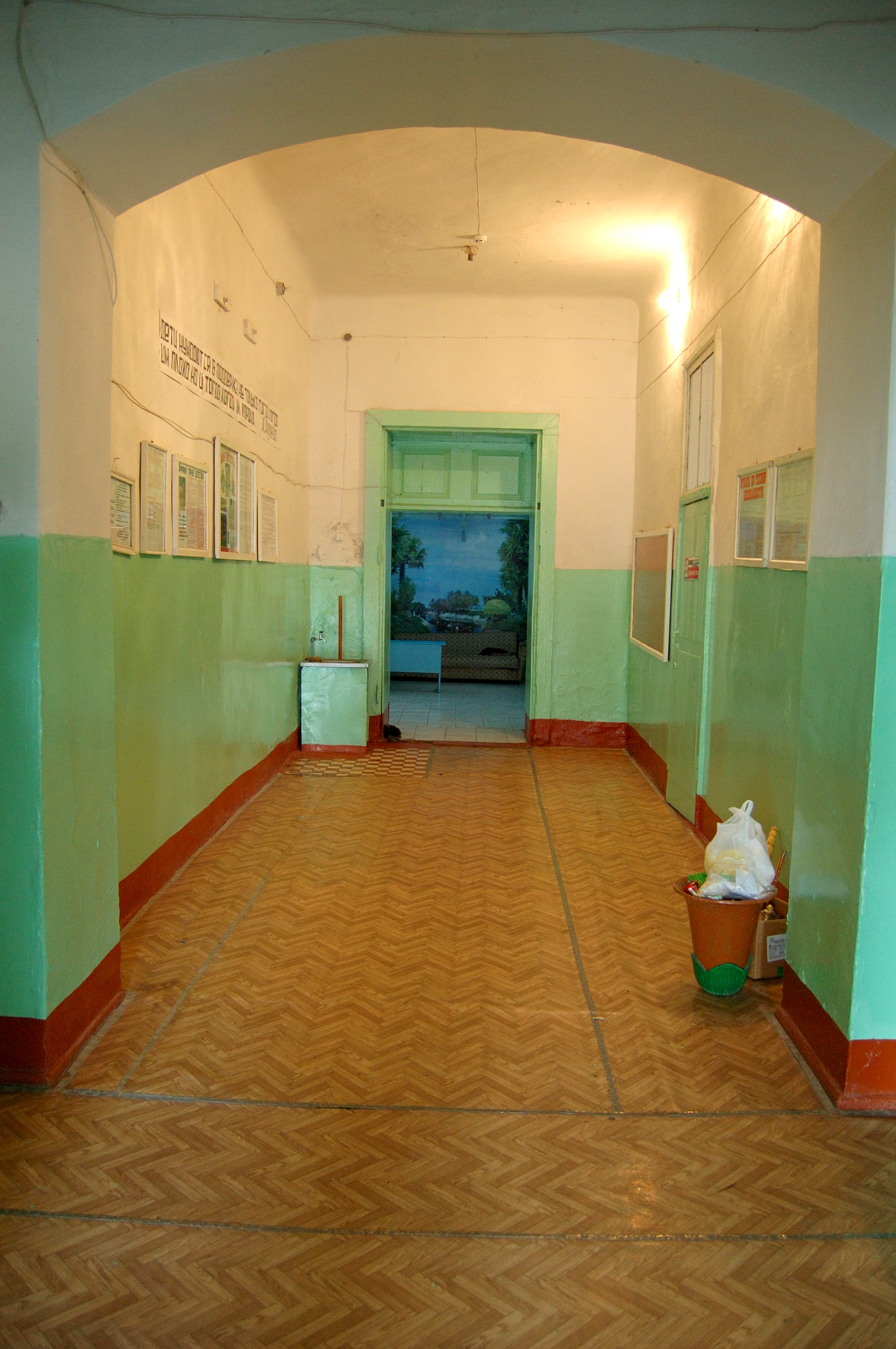 Interior of the Brunnental School in 2006. Source: Steven Schreiber. 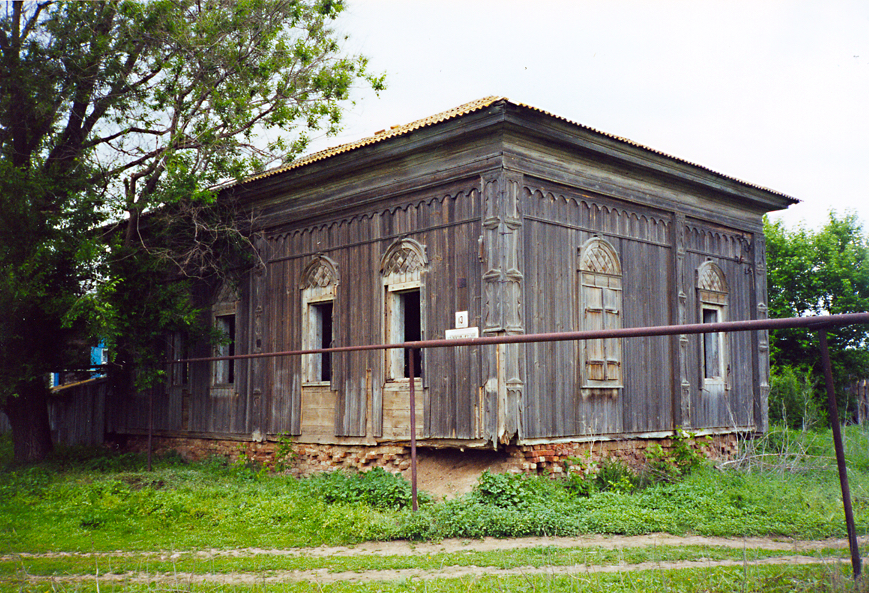 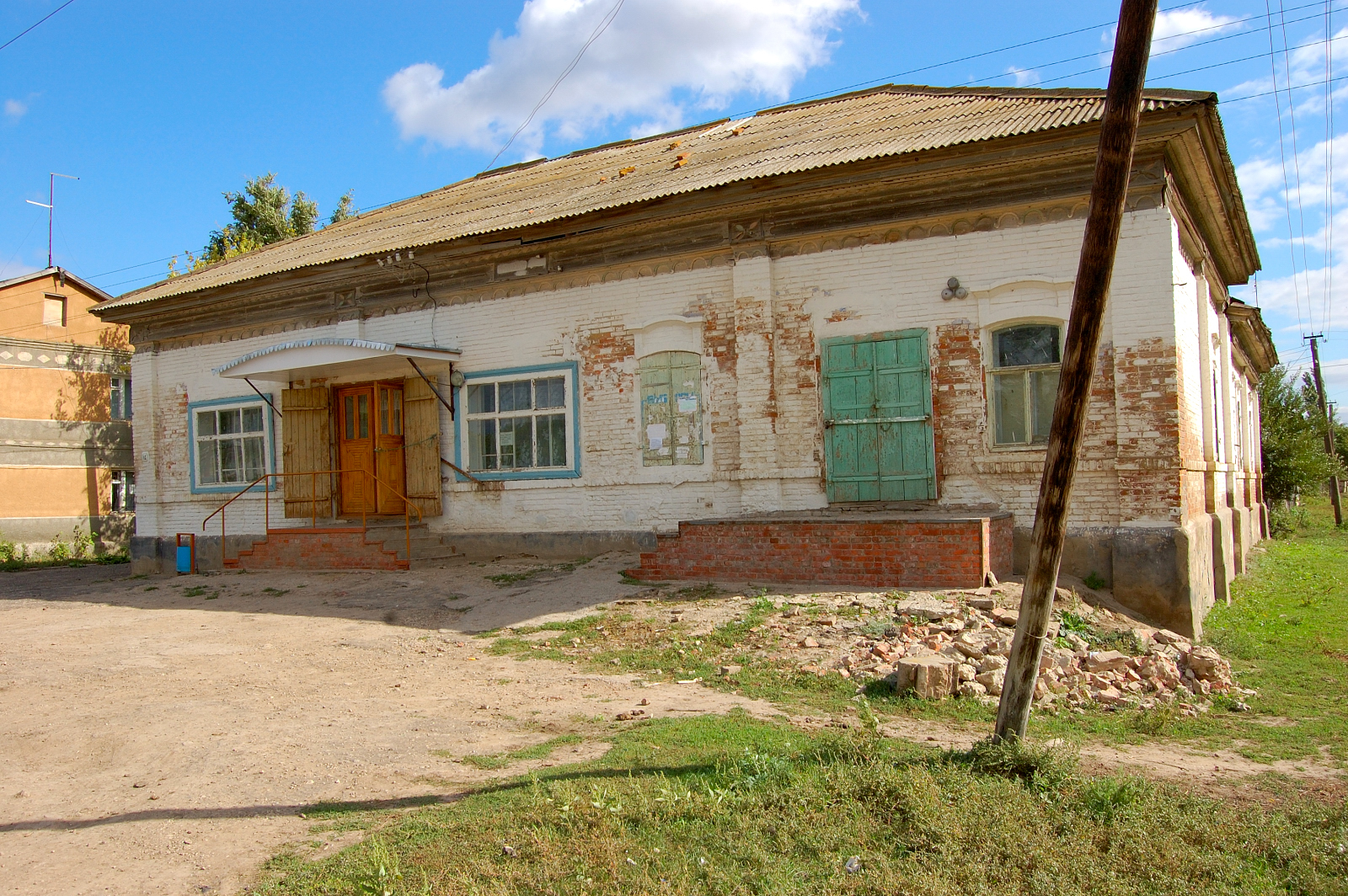 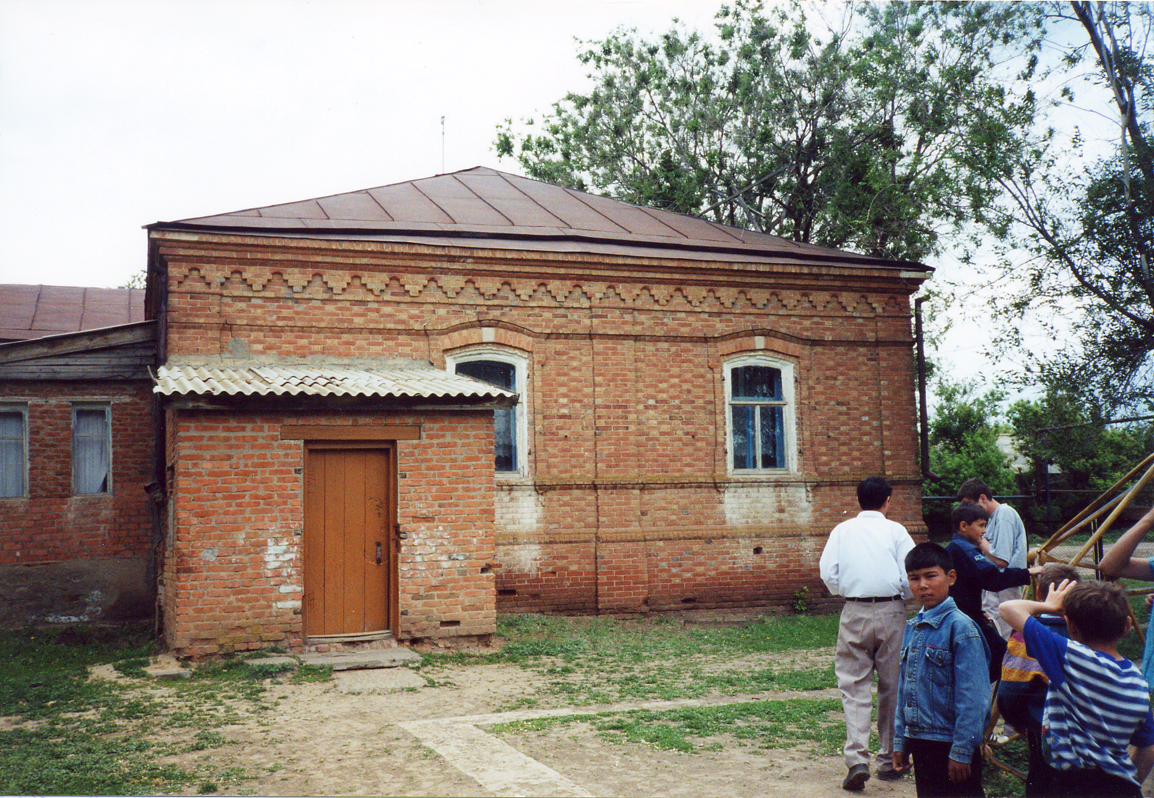 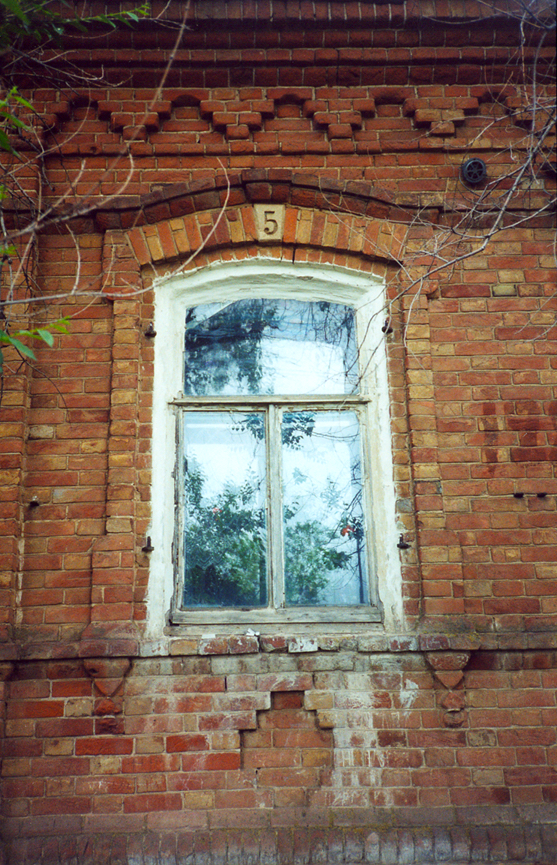 Window in the former Brunnental parsonage. The 5 is part of a series of numbers over the windows indicating the date of construction in 1895. (2001). Source: Steven Schreiber. 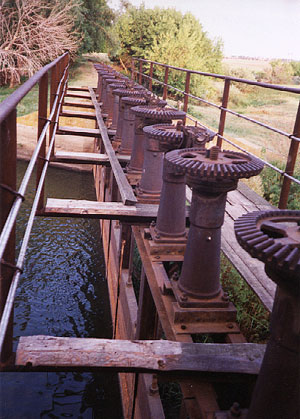 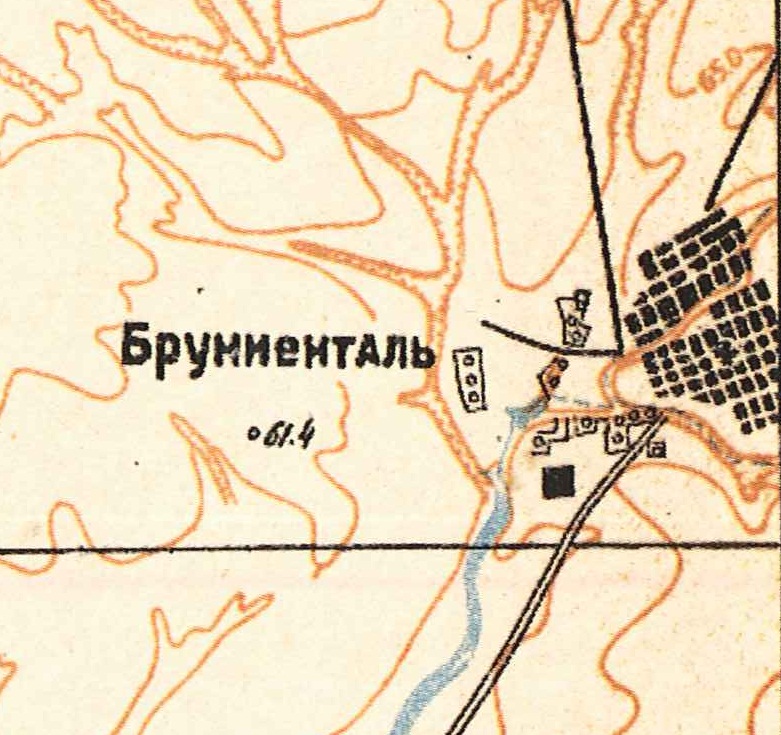 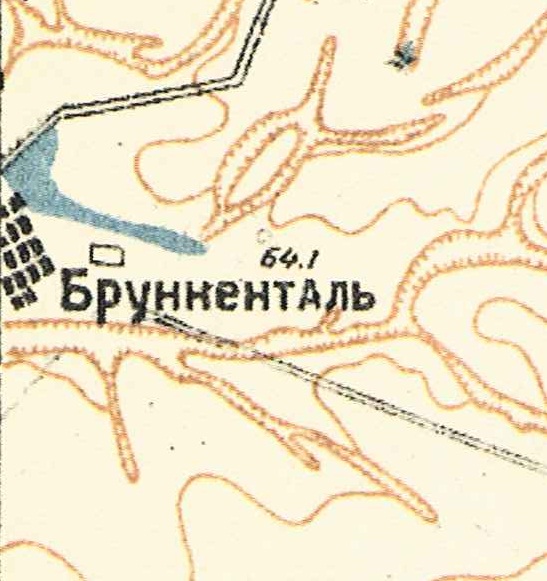 Residents of Brunnental were both Lutherans and Reformed. Between 1855 and 1865, the Lutherans were served by pastors from the parish of Warenburg. In 1865, Brunnental became part of the Eckheim parish.

In the first years after the founding of the colony, worship services were held in the school house (also used as the prayer house). In 1877, a wooden church built in the so-called "kontor style" was completed. The structure was designed for 1,200 worshippers. A wooden bell tower was installed near the church. Those of the Reformed faith used the prayer house.

Brunnental was the center of the Brüdershaft (Brotherhood or Brethren) movement on the Wiesenseite (meadow side of the Volga River). In 1871, under the leadership of Rev. Wilhelm Stärkel from Norka, a Brüderschaft conference was held in Brunnental.

A new brick parsonage was built in 1895 for Rev. Stuber and his family after the former wooden structure was partially burned in 1894.

On April 15, 1936, the Commission on Religious Affairs for the Autonomous Soviet Socialist Republic of the Volga Germans ordered that the church in Brunnental be closed. At that time, there were still 900 people in the church community.

Brunnental was established as a daughter colony in 1855 by families from the mother colonies of Walter, Norka, Kolb, Grimm, Schilling, Kautz, Müller and Pobochnaya. They were joined in 1863 by families from other villages including Dietel, Frank, and Huck. Families from many villages continued to relocate to Brunnental over the next several decades.

The colony was located on the Wiesenseite (meadow side) of the Volga River.

Initially, the colony was named Blumenthal after the then president of the Moscow Evangelical Lutheran Consistory, Heinrich von Blumenthal. However, the name Brunnental (Spring Valley), which accurately describes the natural features surrounding the colony, was most commonly used. The colony was given the Russian name of Krivoyar in 1915, and it remains in use today.

A large red brick schoolhouse was completed in 1902 and remains in use as of 2022. The current residents call it "our German School".

In 1921, colonists from Brunnental participated in the mass peasant uprisings against the Bolsheviks and some were killed. There was heavy fighting in the area during the Russian (Bolshevik) Revolution.

In 1922, hundreds of people from Brunnental fled to Germany to escape a severe famine in the Volga region resulting from the civil war and a prolonged drought. A letter written by Heinrich Weber to his brother Johannes in December 1921 describes the desperate situation facing the people in Brunnental.

All of the ethnic Germans residing in Brunnental were deported to Siberia and Central Asia in the fall of 1941.

A Report and Experiences of my Volga German Home village/town Brunnental, Kanton Selmann, from the foundation in year 1855 up to the displacement on the order of Stalin in August of 1941 by Jakob Mohrland (English Translation from the German text)